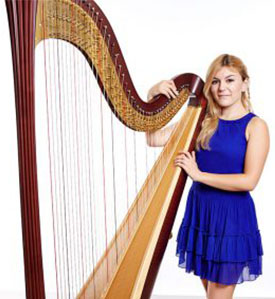 Born in 1995, considered as ‘one of the most talented musicians of the world of harp’, Gunes Hızlılar currently Works as the assistant harp group chief in the Niedersachsische Staatsorchester Hannover, Hannover State Opera’s permanent symphony orchestra. She also continues her studies towards a graduate degree with Prof. Stephen Fitzpatrick at the Salzburg Mozarteum University.

Following her first concert as soloist in 2015 with the Istanbul University Symphony Orchestra under the conductorship of Ramiz Melik Aslanov, she was chosen to be successful at the concerto competition held by the Pacific Philarmonic Orchestra, Vancouver , Canada ‘s Pacific Region International Academy; she performed together with this orchestra and performed Debussy’s ‘Danse Sacree et Profane’ as soloist in may concerts.

She was chosen as the’ woman star of the future’ by IKSVin 2018, and held  a concert together with the honorary guest  Idil Biret at the Bogazici University Albert Long Hall within the 46th Istanbul Music Festival. Wıthın the same year she held a solo performance at Is Sanat’s ‘Shining Stars’ Project and won the Meric Soylu honorary mension prize.

Aside from her soloist and chamber music performances, she joined the tour of Deutsche Philarmonie Orchestra covering Europe and South America. She performed in concert venues such as Berlin Filarmoni, Frankfurt Alte Oper, Sala Sao Paulo with the conductors and soloists such as David Afkham, Jonathan Nott, Steven Isserlis. She has performed with the Osterreischisches Ensemble fur Neue Musik where some of the works were performed fort he first time. She performed with Ensemble Mini in many concerts in Berlin. She was accepted into Staatskapelle Berlin in 2019 where Daniel Barenboim is the general music director, and worked together with names such as Zubin Mehta, Martha Argerich, Pinchas Zuckermann and took place in the opera, symphony and chamber music concerts. Following her graduation from this Academy she joined Niedersachsische Staatsorchester Hannover upon their invitation.

She entered Harp Masters Academy in in Switzerland with a scholarship and actively took place in the harp masterclasses of Isabelle Perrin, Irina Zinng, Karen Vaughan. She studied with Isabelle Moretti, Xavier de Maistre, Jana Bouskova, Alice Giles. She studied with Masumi Nagasawa on the 18th century harp music; with Mara Galassi, Margret Koll and Hans Bruderi on baroque harp and early period music; with Simone Fontanelli on contemporary music.

She completed undergraduate education at Salzburg Mozarteum University in 2019 with the highest degree and subsequently she was accepted into Staatskapelle Berlin Orchestra Academy where she is  the first Turkish Harpist. During the course of her education, Gunes was supported by  Rotary Club, IKSV, Yehudi Menuhin Foundation, and for many years she has been supported by the Contemporary Education Fund (CEV)under the Young Talents Project. Currently, Gunes is the assistant harp group chief of the Hannover State Opera Orchestra and continues her graduate study at the Mozarteum University.