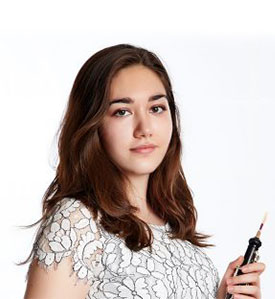 Gülin Ataklı was born in 1998 in Istanbul, Turkey. 2009, she began her Oboe education at Istanbul Mimar Sinan Fine Arts University State Conservatory with Mehmet Seyid Mas. In June 2016, she graduated from Conservatorium and completed her highschool education.

She got accepted to the Oboe Class of Prof. François Leleux and started to study Bachelor of Music in October 2016 at Hochschule für Musik und Theater München.

She got invited to perform as a soloist at 31. Pleven International Music Festival and performed Bohuslav Martinu Oboe Concerto with Pleven Philharmonic under the baton of Ivan Angelov in 2018. In January 2020, she took a part in Çev Sanat’s Young Talents Concert and performed the 3rd movement of W.A. Mozart Oboe Concerto with her own cadenza with Avrasya Philharmonic Orchestra under the baton of İbrahim Yazıcı.

She has been chosen as a scholar by HMT München and was supported by Manfred und Monika Wölfel Stiftung München during the 2019/2020 Academic year.
Gülin Ataklı has succesfully graduated from Bachelor of Music from the Oboe Class of Prof. François Leleux at the University of Music and Performing Arts Munich in December 2020 and got accepted to study Master of Music with Prof. François Leleux in Munich. Gülin Atakli’s education is supported by “Young Talents Project” of ÇEV Modern Education Foundation (Istanbul, Turkey).

As part of the Erasmus+ programme, Gulin was accepted as an obua player to Conservatoire National Superieur de Musique et de Danse de Paris for the summer 2022 class as a student of David Walter, obua player and pedagogue.

Gulin played with the Divan Orchestra in their European Tour during August 1-15,2022 covering cities from Cologne to Luzern, where world famous pianist Lang Lang was the soloist and famous maestro David  Barenboim was the conductor.

She has successfully passed the exams of Munchner Philharmoniker’s obua academy and will start to perform in the Orchestra’s concerts starting from October 2022.