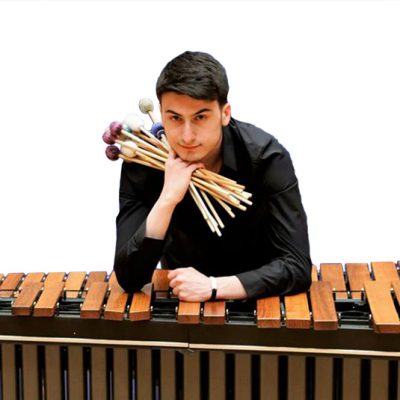 Born in 1996 in Ankara into a family of musicians. Started his music education in 2002 at the Bilkent University Music Preparatory School Piano Art Department . Between 2006-2014 he was Aydin Mecid’s student in percussion instruments Art Department.

He gave concerts in many countries as a member of the Turkish National Youth Philarmonic Orchestra. He performed Emmanuel Sejourne’s Marimba and String instruments Concerto together with Presidential Symphony Orchestra in 2016. He participated in many concerts with Hamburg Percussion Ensemble in Germany. He gave a recital at the Bilkent Auditorium in 2018. Elman performed as soloist in a Germany tour of five concerts with Landesjugendsinfonieorchester Hessen in 2019.

His album with Trio RVB “Hybrid” will be released at the end of 2022. He is currently the Percussion Artistic Director for Hamburger Percussion Ensemble and also for Trio Reverberation, and continues with giving concerts with these groups in Germany and in other countries.

He continues his graduate degree studies at the Hochschule fur Musik und Theater, Hamburg with Prof.Cornelia Monske, with the support of CEV Sanat.