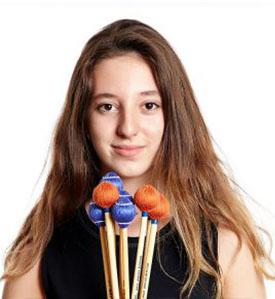 Born in 2003 in Istanbul. Started her music education in 2004 at the Gurkey Percussion Academy by taking percussion lessons. She continued her education at the Istanbul University State Conservatory  Percussion Arts Department between 2009-2018.

During 2018-2019 she attended the 4th Grade of High School with 100% scholarship at The Purcell School(U.K.) Vibration, Marimba, Orchestra Percussion Department with Daniella Ganeva, Kevin Hathway, David Gordon. She was chosen to be a scholar and was rewarded by two separate honor awards by the Wall Trust and Austin&Hope Pilkington and had two separate honor awards. In 2021 she was chosen to benefit from the ‘Young Women Stars of Tomorrow: Young Women Musicians Support Fund’ (TSKB) within the scope of 49. Istanbul Music Festival. Her performance was recorded within the scope of thıs project.

Two albums were released in 2022by Gloss Music, namely ‘Children Songs for Percussion-16 songs’ by and ‘Bir Baskadır Benim Memleketim-single’ . Beste became Oke Cajon endorser  and  Istanbul Mehmet Cymbals endorser in 2016. Special signature series of cymbals  are made in her name since 2020. She became GPA Perküstrüman endorser in 2022.